Giardia in a dog

Giardia in a dog: symptoms and treatment

Giardia. A small critter with sometimes big consequences. Giardia is a common parasite. In fact, in dogs it is one of the most common gastrointestinal parasites. It occurs in approximately 10% of all dogs. Fortunately, in many cases it is easy to treat. We tell you more about the cause, symptoms and treatment. Please read on.

The cause of Giardia 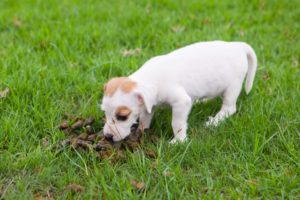 Is Giardia dangerous for a dog?

In general, Giardia is not dangerous. Many dogs have the parasite in their intestines without any problems. In younger or weakened animals Giardia sometimes causes health problems. Usually in the form of diarrhea that is difficult to control. If dogs become infected, it takes an average of 1 to 2 weeks for symptoms to appear.

Recognize Giardia in your dog: the symptoms

Most dogs carry the Giardia parasite and have no symptoms. When your four-legged friend suffers from it, we often see the following symptoms. The degree of symptoms varies greatly from dog to dog.

Diagnosis of Giardia in a dog

Do you recognize one or more symptoms in your dog? If so, always consult your veterinarian. The diagnosis of Giardia is made by detecting the parasite. This can be done with a microscope or with a SNAP test.

Hygiene in the house 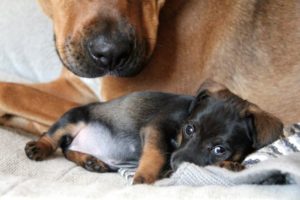 Is your dog receiving a Giardia treatment? Then good hygiene in the house is extremely important. Keep the following things in mind.

Food for dogs with Giardia

In case of severe symptoms of Giardia, such as persistent diarrhea, the vet may prescribe a special diet. We recommend giving easily digestible food to calm the intestines. SANIMED Intestinal offers support in case of deteriorated digestion, thin stools and hypersensitivity. 100% natural and proven effective.